During fall semester 2015, students have been sneaking around with plastic bags and surreptitiously slipping them to Dr. Hron or furtively smuggling them into her classes. What are these suspicious-looking packages?

It all started when Dr. Madelaine Hron shared some of her experiences working in Rwandan prisons with her EN 313: West African Literature & Culture class. For a number of years now, Dr. Hron has been working with the small Canadian-based NGO, JustEquipping/Juste.Equipage , which runs various kinds of restorative justice projects in the Great Lakes Regions of Africa, especially projects related to prisons in Rwanda, the Democratic Republic of Congo and Burundi. Most notably, JustEquipping has encouraged more than 700 convicted killers of the 1994 genocide in Rwanda to write letters asking forgiveness of their victims. Local chaplains would then locate these victims and bring them these letters. Then, if the victims wished, the chaplains read them these letters, counseling the victims in their pain and grief. If the victims wanted, the chaplains would facilitate a face-to-face meeting with the killer in prison.

Dr. Hron has seen and done some pretty amazing things with this group – for instance, she has played soccer with teens in prison, coddled the babies of female prisoners (women can have their children in prison until they are six years old), or celebrated mass beside dozens of convicted priests and bishops. 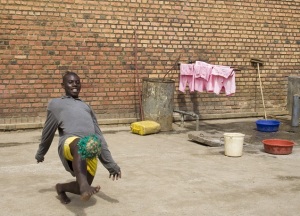 Dr. Hron has witnessed a poignant victim meet with an offender for the first time, an offender who killed many members of the victim’s family. She has also visited a village where offenders and victims live together in peace. In one case, they live right across the street from each other, with the victims’ houses having been built by those who massacred their families.

Dr. Hron also shared with her class the terrible conditions she witnessed in some of these prisons. For instance, in the central prison in Goma, Congo, there are 1800 male adults in a facility built for 150; there are no barracks, everyone sleeps in an open courtyard, be it rain or shine. Dr. Hron was particularly troubled by the situation of women in Rwandan prisons, since she spent quite a bit of time with them. In Rwanda, until 2012, prison facilities were co-ed; luckily now, there is one main prison for female prisoners in Ruhengeri-Musanze. Many of these women do not really deserve to be in prison, but, being poor and disenfranchised, cannot afford a decent lawyer. As Dr. Hron noted in class, “In Rwanda, having an abortion, or aiding in an abortion is a capital offence – meaning a life sentence. It is very easy to accuse a woman who has miscarried of aborting her fetus, or to indict a neighbour who brought her some tea. I know of women who gave birth to the infant they supposedly aborted while in prison. Yet they are still there, wasting away, awaiting trial, because they don’t have the money for a defence attorney, like many other poor women languishing in Rwandan prisons.”

Women in Rwandan prisons suffer daily degradation – for instance, prisons do not even provide them with underwear or sanitary napkins. Ostracized and ashamed, most women dare not ask family or friends for such basic necessities. Dr. Hron explained that last time she traveled to Rwanda she collected underwear and sanitary napkins for these female prisoners. She wished she could undertake such a project again, since a local member of JustEquipping was leaving for Rwanda in January.

Upon hearing that they could do something tangible to help these women, Dr. Hron’s EN313 class sprang into action. They wanted to provide each and every woman with a new pair of underwear for 2016. Dr. Hron was skeptical about this goal– there are more than 250 women in the Ruhengeri-Musanze prison… and there were only 26 students in her EN 313 class! However, nothing would deter these students – they spread the news and started bringing in underwear. Impressed, Dr. Hron then also recruited the help of her own friends, her EN/FS colleagues, as well as that of her large 160 person class, EN209 Fairy Tales. Soon, underwear starting piling up in Dr. Hron’s office, her car, her house… And by Christmas break, Dr. Hron counted that she had amassed more than 300 pairs of women’s undergarments! Amazing! Over the Christmas break, Dr. Hron carefully rolled them up, so that they would fit into a large suitcase (this rolling took more than 6 hours). 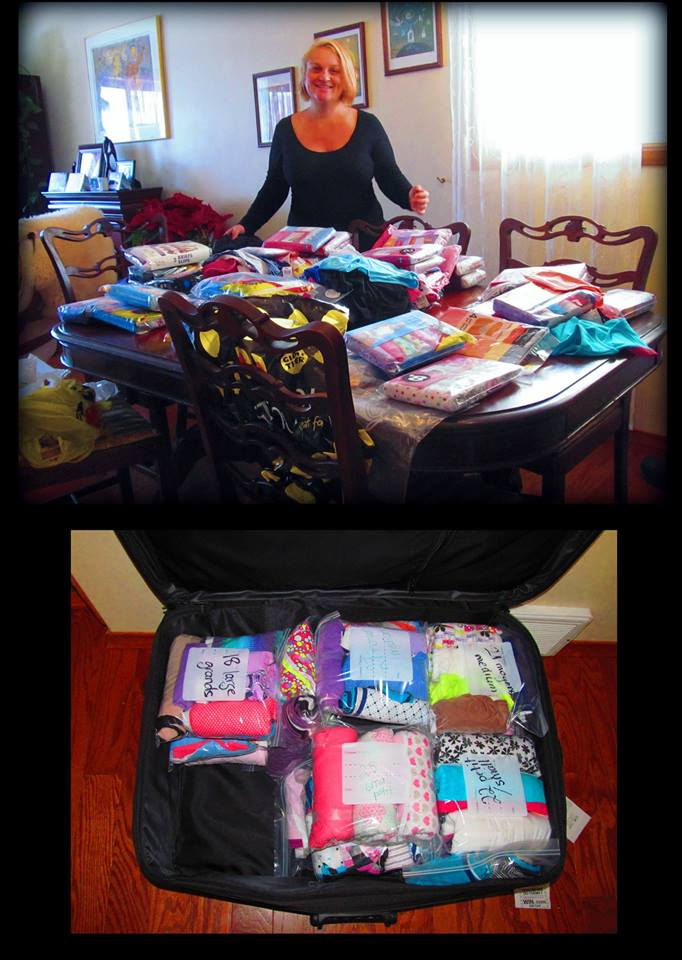 The women in Ruhengeri-Musanze prison will most appreciate all your gestures of kindness. The suitcase is in Rwanda right now (Feb. 2016), and the underwear will be distributed during the week of Feb 22-26. Thank you everyone for your generosity, and for making the world a bit better place – one pair of undies at a time…